Don’t we all just love papad, and how it can help elevate the banalest fare with its crunch and crackle. What if we tell you that not just the batter, but even the dough it is made of is just as smashing? Yes, you heard us! The sticky dough-like porridge is also a snack of its own in Gujarat. Khichu (or Khichiyu) is a spicy snack made with a type of flour or a combination of flours peppered with a selection of spices and salt. It is traditionally made with rice flour, but one can experiment with other flours as well. It is kneaded with water to make a thick porridge-like snack. 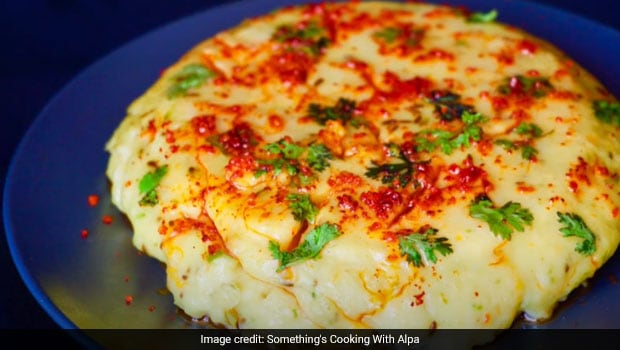 In this recipe video, Mumbai-based YouTuber Alpa tells us how to make this Gujarat delicacy at home. It is instant, yummy, and a hit among kids as well. The recipe was posted on the YouTube Channel, ‘Something’s Cooking With Alpa’.
For the recipe you would need to add water in a kadhai, to which add crushed cumin seeds, then add crushed ajwain seeds, the goes some chilli paste, then some salt followed by cooking soda and finally some oil. Then let the water come to a boil. Then add rice flour, add gradually and keep mixing in as well. Mix it until there are no lumps. Let it cook for a while, and your khichu is ready! Garnish it with fresh coriander leaves, some oil and pickle masala.