Katie Button gives workers at her Asheville, N.C., restaurants an annual cash incentive of $300 if they get medical checkups and have their teeth cleaned. In Austin, Texas, the people who make bone-marrow tacos and mix carrot-juice margaritas at Comedor attend free yoga classes and run together.

At West-bourne, an all-day cafe in Manhattan, service starts with meditation; soon the owners will offer credits at a nearby child-care center. At Honey Butter Fried Chicken, two counter-service spots in Chicago, workers get maternity and paternity leaves.

And in East Nashville, Tenn., the chef Sean Brock is building a soundproof room in his new culinary compound where employees can escape for a treatment called cranial electrotherapy stimulation.

In ways both big and small, a new concern for the health and wellness of workers is seeping into the anxiety-ridden, run-till-you-drop world of restaurants, where for years nobody blinked if a day at work included screaming chefs and substance abuse.

It’s not exactly the Goop-ification of the pirate ship, but it is a significant shift. 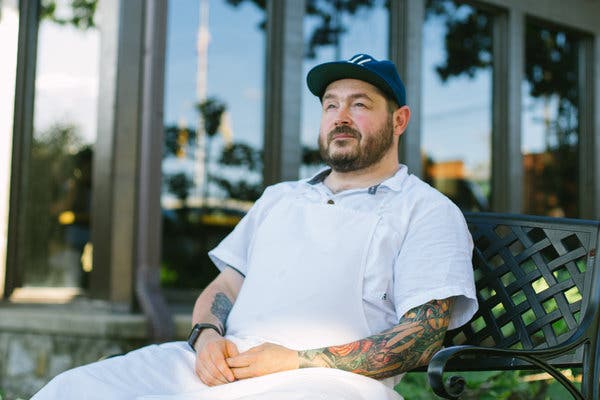 “I don’t think it’s a fad,” said Elizabeth Meltz, a founder of Women in Hospitality United, a nonprofit organization, and the senior director of environmental health at Dig Food Group, which has about 1,000 employees spread out over 30 restaurants in the Northeast. In addition to benefits that include mental-health care, Dig employees get flu shots, field trips to the company farm in Chester, N.Y., and personalized management coaching. Dogs can come to the office, too.

“If you don’t have healthy, happy people who can do their jobs,” Ms. Meltz said, “then you can’t have a successful business.”

Better health-care packages and vacation schedules are becoming the rule rather than the exception. And many restaurants are going beyond traditional benefits, offering emotional-support services and the kind of perks that appeal to a new generation that demands flexibility, work-life balance and service to social causes.

The changes are driven in part by a new appreciation for a safer, more sober workplace, as well as the #MeToo movement, which has exposed sexual harassment and other abusive behavior at restaurants. But business is business: although extra benefits cost more, they hedge against the industry’s widespread labor shortage.

At 4505 Burgers & BBQ, two fast-casual restaurants in the Bay Area, the chef and founder, Ryan Farr, expanded benefits for his 80 employees to include help with personal problems, a program that about 60 percent of his workers use. He employs a full-time, bilingual human-resources specialist, and pay is well above minimum wage. Annual turnover is down to 62 percent, from more than double that when its first restaurant opened in San Francisco in 2014, Mr. Farr said.

“Maybe my margins aren’t as strong as they could be, but you’ve got to make sure you’re giving people what you think they need, or your business isn’t going to work,” he said.

Benefits vary greatly for the 15.3 million Americans in the restaurant industry, in which fast-food jobs pay an average of about $9 an hour and tips make up the bulk of many incomes.

Only about 40 percent of hotels and restaurants in the United States offer any type of health insurance, and only 29 percent of jobs offer retirement benefits, according to the National Compensation Survey released last year by the U.S. Bureau of Labor Statistics.

To pay for health and wellness services, some restaurants add an additional, often voluntary, charge to each customer’s bill. It can be as little as $1 per check to as much as 5 percent of the total tab.

The surcharges began appearing in 2008, after voters in San Francisco approved an ordinance requiring businesses with more than 20 employees to set aside money for health care. (The federal Affordable Care Act requires employers with 50 or more full-time-equivalent employees to offer some type of health insurance benefits.) 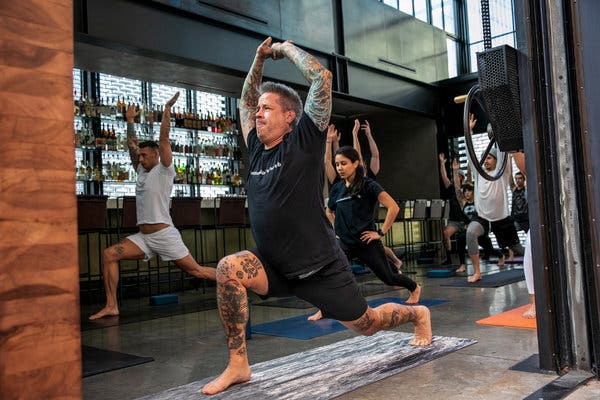 Despite complaints from diners who would prefer that the cost of health and wellness benefits be worked into the final bill rather than highlighted as a separate surcharge, the practice continues to flourish.

Diners at Comedor, an Austin restaurant influenced by the food of Mexico City, are asked to pay an additional 1.5 percent of their bill for employees’ health care and wellness. It can be removed upon request, which doesn’t happen very often, said Philip Speer, an owner and the restaurant’s pastry chef.

The money goes toward employee health-insurance premiums, of which the company pays 85 percent. It also helps cover the cost of weekly yoga classes for anyone in the local hospitality industry.

Some staff members even get together for thrice-weekly morning 5K runs. Mr. Speer began the restaurant’s running club as a way to create the camaraderie and community that used to come during after-shift drinks at midnight.

“People are starting to feel like if they don’t do something, they are going to lose an edge in hiring and the longevity of staff,” he said.

Adding creative perks doesn’t mean that work is a playpen. “This is still a restaurant, and still high-stress and still demanding,” Mr. Speer said. “I might even expect more of you because of them.” 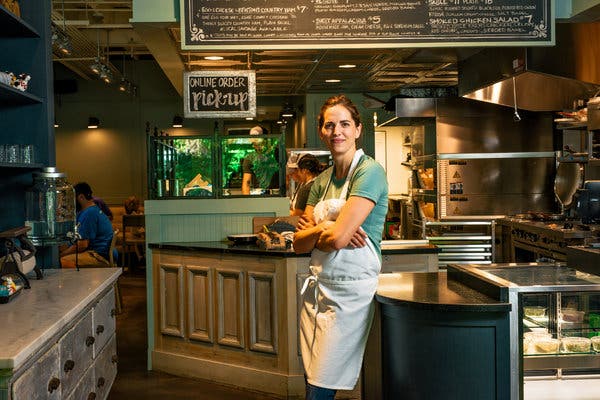 The wellness packages at restaurants are varied and evolving. In North Carolina, the chef Katie Button tries to limit long workweeks. She pays membership fees at a primary-care clinic that offers free, unlimited visits and online consultations, which works well for younger employees who might simply need sutures or a strep-throat test.

At the Indigo Road Hospitality Group, which employs about 1,000 people in 20 restaurants and bars in four Southern states and Washington, D.C., the company pays 75 percent of each employee’s health care premiums, and offers leave for new parents and mental-health counseling. This month, it plans to start meditation classes in one of the company’s event spaces in Charleston, S.C.

The company even offers employees home loans with no interest for three years. So far, 13 employees have taken loans, and not one has defaulted, said Steve Palmer, the managing partner.

“Maybe it’s just purely self-preservation, but there’s been this shift in the industry,” he said.

There’s been a broader approach to employee welfare at BRG Hospitality, the new name of the restaurant group that the chef John Besh founded in New Orleans, since Mr. Besh, who remains an owner, stepped back from operations in the wake of a 2017 report that 25 current and former employees said they had been sexually harassed at some of his dozen restaurants.

New policies and programs make sure employees can report problems and get help. Other changes are more personal, and not related to the sexual-harassment scandal.

Kelly Fields, who created the restaurant Willa Jean as part of the Besh group, paid membership fees for employees who wanted to work out at a nearby gym. She and co-workers rotated through boxing classes, Pilates and step-climbing sessions. Initially, 37 employees signed up, but some never came. Eventually, the program fizzled altogether.

“I love that we are moving in the direction where this is becoming the normal thing,” she said. “But I also completely understand the idea that I don’t want to get sweaty and do yoga with the people I work with. I just want to work.”

Wellness means different things to different people, and needs to be personalized, said Camilla Marcus, the chef and owner of West-bourne, a small restaurant in SoHo inspired by the Los Angeles of the 1960s.

To that end, the restaurant offers a program called “embrace your side hustle,” which offers $35 a month to any employee for pursuits that fall into categories like wellness, community or cultural enrichment. It can be spent on admission to an art show, a new dish at a restaurant, gym membership or even buying a plant, as long as employees can explain in the application how it will enhance their lives and help them meet their wellness goals. 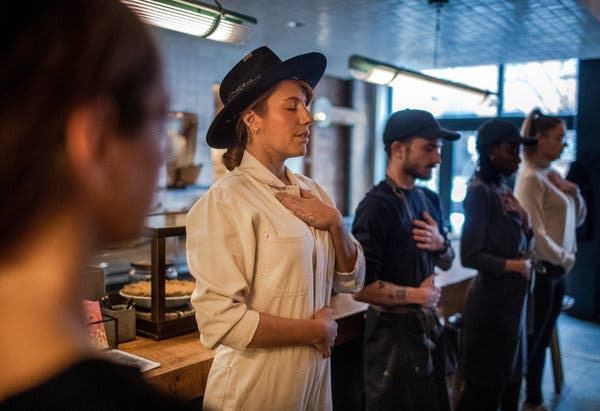 Employees also gather before each shift for “mindful minutes,” brief meditation sessions to counter the impact of work that can be physically and psychologically taxing.

“These jobs are very intense, and you spend a very long time being intensely stimulated,” Ms. Marcus said. “Having the ability to have a mental refresh and repositioning before you start gives people the tools to take meditative space at any point in your shift.”

The restaurant also is working with Vivvi, a new employer-subsidized child-care company in Manhattan that’s open 12 hours a day, 250 days a year. Employees will get credits for drop-in child care, the cost of which will be paid in part by federal tax breaks.

“We found that even among our all-stars, time and attendance was a challenge because they didn’t have dependable day care,” Ms. Marcus said.

Child care should be at the top of the benefits list for an industry that employs 15.1 million people, she said.

“If you can’t show up for work, none of those other perks matter,” she said. “How do we make child care fit our generation? It’s about work-life integration.”

Mr. Brock, the Southern chef, sought treatment for alcohol addiction in 2017. He wants to engineer a sweeping transformation of what it means to work in the restaurant industry. He had been operating eight restaurants in five cities, but left it all behind for a new venture in Nashville where consideration for the health and happiness of staff will be as essential as menu development.

On the second floor of Audrey, the restaurant and wellness complex he plans to open early this summer, workers will be able to take self-help and conflict-resolution classes. In another room, they can sit in comfortable chairs with weighted blankets and meditate, or enjoy cranial electrotherapy stimulation, which some studies indicate can relieve anxiety, depression and stress.

“We approach every decision we make by asking what is the stress level, and is that stress worth the contribution?” he said. “That’s from silverware to menus to service.”

Mr. Brock has developed a staff handbook outlining communication techniques he learned during his time at the Meadows, an addiction-recovery center in Arizona, and plans to offer bonuses in the form of massage or reiki sessions.

“We are not going to force anything on anyone,” he said, “but we believe if we are healthy and happy, we can pass it on to the guests.”