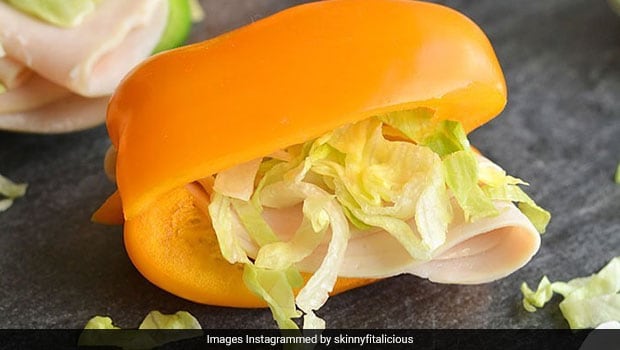 The internet is no stranger to bizarre food combinations. The sensational ‘Dalgona’ coffee also started out as a simple fad, and soon took over our social media feeds in the lockdown period. Whether it’s a simple cloud bread or a delicious pancake cereal – there are a number of innovative and unique food trends which we have seen in the past few months. Fitness enthusiasts and food bloggers recently came up with a ‘bell pepper’ sandwich, which substitutes bread with sliced bell pepper. Take a look:

The bell pepper sandwich is keto-friendly as it omits carbohydrates found in bread and uses the healthy vegetable instead. The filling is open to be experimented with, as there are fillings with a variety of meats, sauces, cheeses and even more vegetables that can be used. The sandwich can be put together with two slices of bell pepper, or can be had as an open sandwich with just a single slice.

The crunchy texture that bell pepper imparts to the sandwich is something that people have found interesting to taste. Further, nutritionists and experts are also in favour of the bell pepper sandwich trend since it is an easy way to cut down on calories and carbs while adding some healthy vegetables to the diet. However, some fitness experts such as Lucy Mountain have shunned the viral trend, saying that it is nothing but a revamped version of a very small salad.

Lucy Mountain wrote in the caption how the bell pepper sandwich trend is the by-product of a food culture which is obsessed with dieting. “There isn’t anything inherently wrong with pepper, tomato, cheese and chicken. But combining them and calling them a sandwich implies bread needs a substitute because it’s ‘bad’ – she wrote in her post.

Gordon Ramsay too recently shared his reaction to the bell pepper sandwich trend, calling it ‘idiot sandwich’ in a video that went viral on social media. “That is not a sandwich,” Ramsay says in the video, “No, that is not a low-carb sandwich. Young lady, that there is an idiot sandwich, right there!”

What do you think of the bell pepper sandwich trend? Would you like to try it? Tell us in the comments below!